Meet the local: Constantijn from the Flower Art Museum

Meet the local Constantijn: “The beauty of Aalsmeer is that it’s still a real village. A truly charming village with a windmill situated in its centre. It has its share of local tradesmen who own (family) shops, some of which have existed for more than 100 years. But at the same time, it also has a cosmopolitan feel about it. It is internationally renowned for its flower trade. There are members of the Aalsmeer business sector who travel internationally as part of their jobs but who personally remain very attached to the village.”

Constantijn’s job description doesn’t involve flying all over the world, but he is a vital part of the world of flowers as coordinator of the Flower Art Museum.

Constantijn has lived in Aalsmeer since he was seven years old and after 33 years, he can now proudly consider himself as a member of Aalsmeer society. In addition to his studies, he worked for the local newspaper in Aalsmeer and later went on to become a journalist. When he heard that the bookstore in the village was up for sale, Constantijn – as a book lover and writer of a number of books – knew what he wanted to do. He bought the business and ran the bookshop – the Boekhuis – located in the Zijdstraat for eight years. In 2017 it was time for something different. He sold the bookshop to an employee and started his next project at the brand-new museum in Aalsmeer: the Flower Art Museum.

The Flower Art Museum is the first museum in the world dedicated to contemporary art inspired by flowers and nature. New exhibitions are presented on a quarterly basis introducing Dutch artists and those from further afield. It is not only the flower art theme which makes the museum unique, but also the location in the old water cellar which fits in perfectly with ‘Aalsmeer, the flower village by the water’. The museum is located opposite the water tower and the Westeinderplassen, a Dutch lake which offers several berthing spots. This makes the Flower Art Museum one of the few museums that can be reached by boat. 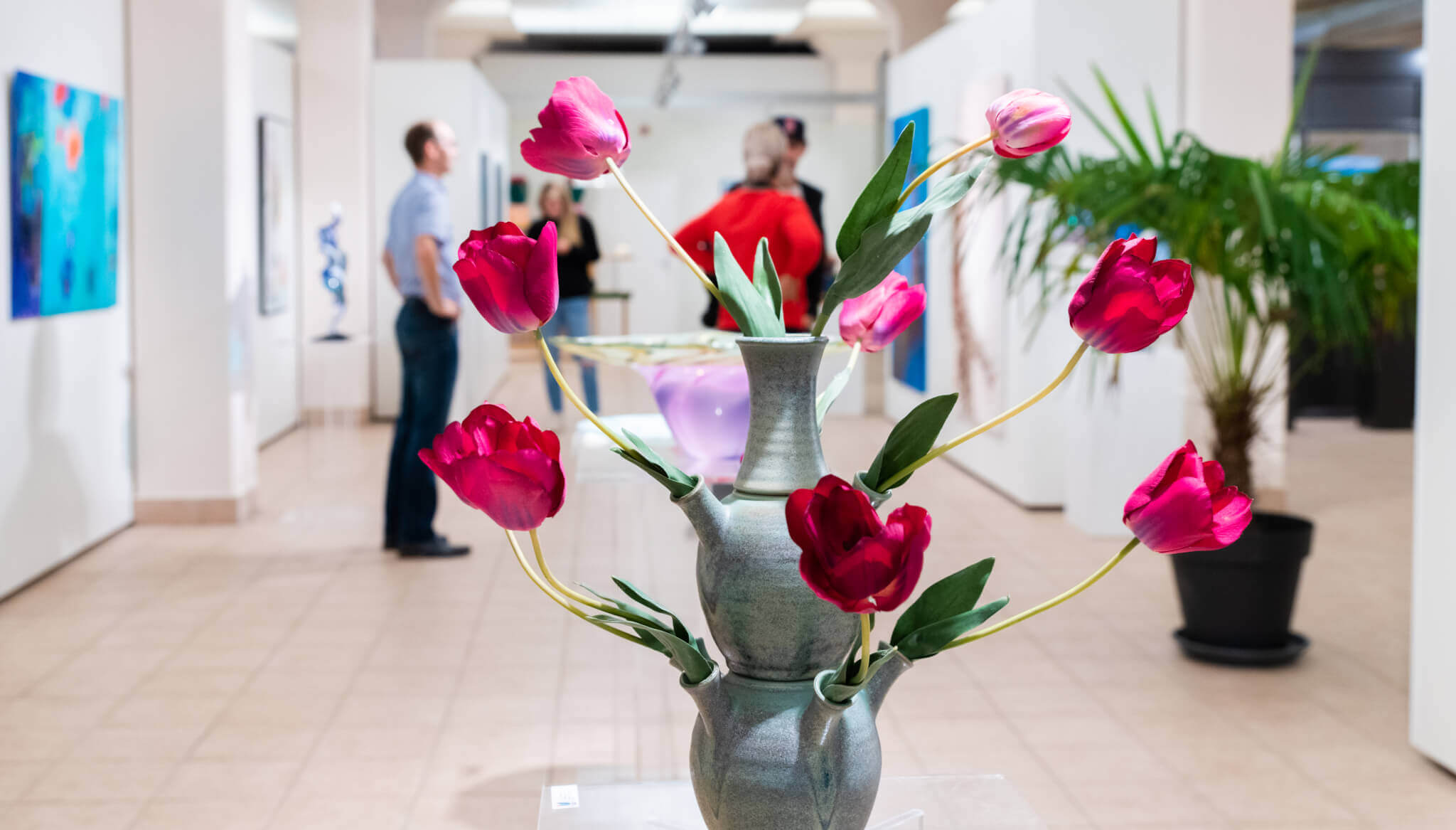 De Watertoren – the water tower. This is an amazing building, or rather the icon of Aalsmeer, as Constantijn rightly refers to it. “It’s such a cool building, because everything inside is still completely intact. Its industrial style makes it an exciting place to explore, for example where the stairs to the upper floor become narrower with every step you take and it’s extremely dark.” Constantijn is not the only one who has a liking for the water tower, his sons also find it very exciting to visit the tower. And once you’ve reached the upper floor, you’ll have a wonderful view of the Westeinderplassen. 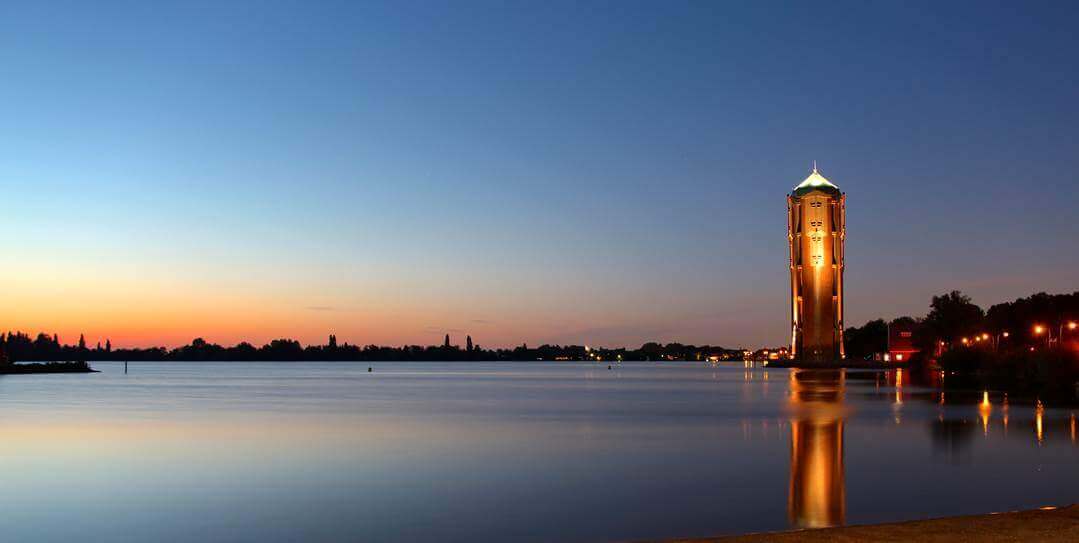 Constantijn also alludes to his wonderment of the ever-changing skies above the Westeinderplassen. “I find it so fascinating that the water tower’s profile changes with each passing hour. Even in dark weather. I have an enormous number of photos in my album now. A compilation of different images all of same place.” According to Constantijn, the Westeinderplassen is a beautiful natural and recreational area. An oasis of peace situated between all the hustle and bustle of Amsterdam and Schiphol. Of course, you can sail between the islands, but Constantijn also suggests cycling around the Westeinderplassen, in order to see all the highlights.

Not so big, but typical of Aalsmeer: the Seringenpark. “The park is a lovely and tranquil place to take a walk and a place where you can find real lilacs.” Another fascinating place to visit is a lilac nursery, Constantijn adds. Aalsmeer is unique in the way it cultivates lilacs. It involves much skill and very hard work. The lilac fields are predominantly located on the islands found on the Westeinderplassen. At specific times of the year the lilacs are brought off the islands and then they are left to bloom in the greenhouses. Moving the lilacs is done manually by boat and known locally as a praam. Nothing is automated. “A fascinating world. An interesting process. This is the most amazing hidden gem in Aalsmeer.” Do you want to learn more about lilac cultivation in Aalsmeer? Constantijn recommends the Lilac Specialist on the Uiterweg, or of course a visit to horticultural museum the Historical Garden. 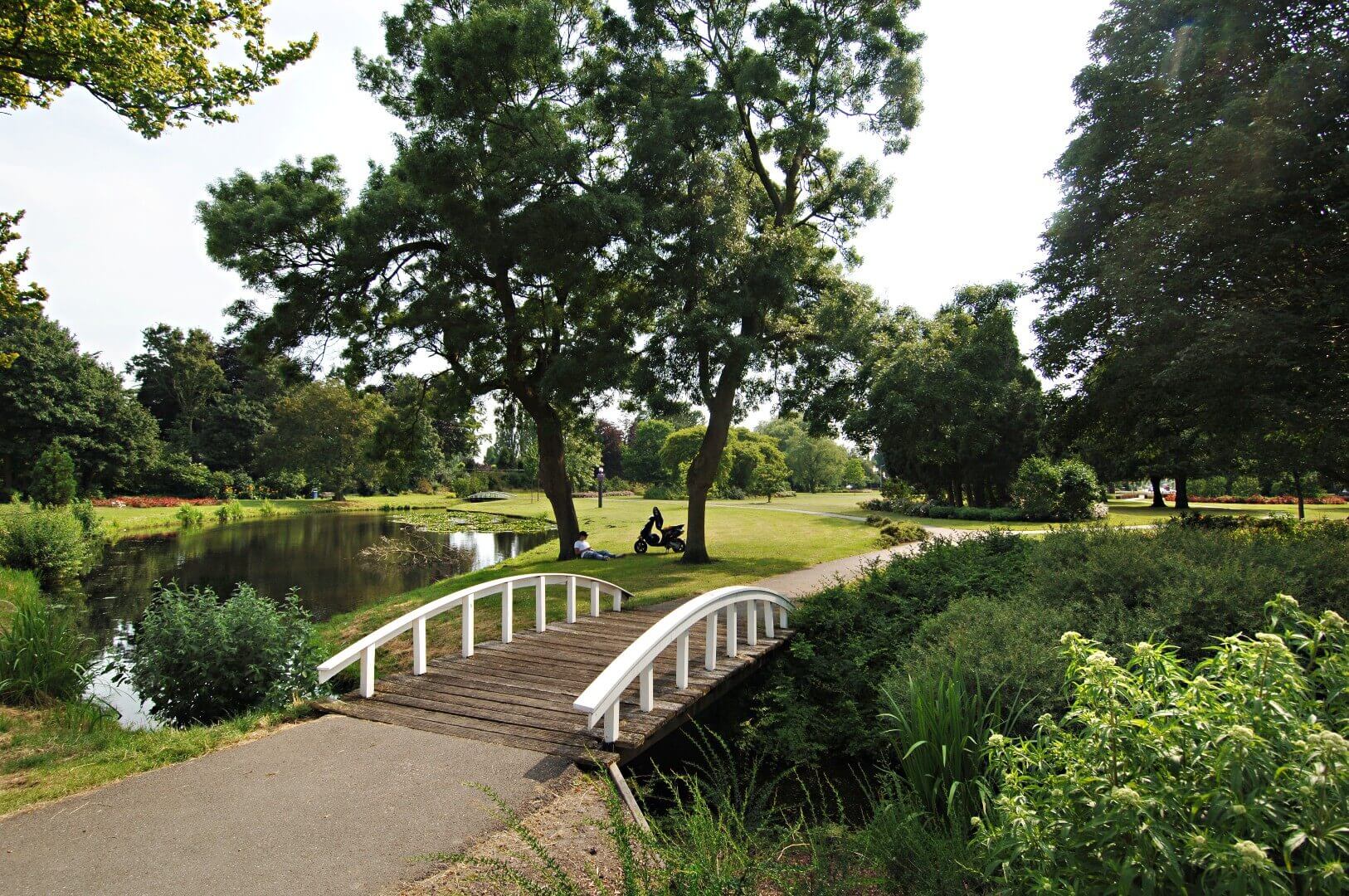 “I recommend paying attention to several Aalsmeer buildings that are architecturally interesting.” Aalsmeer has several buildings that have been designed by famous architects and – for those in the know – there is even a well-known Aalsmeer born architect, called Berghoef. An exceptional example of architecture, one that everyone from Aalsmeer recognises, is the town hall, but other interesting examples can be found on the Oosteinderweg, Aalsmeerderweg and Stommeerkade. If you take part in the Oud Aalsmeer Foundation historic cycling and walking route…you can cycle or walk past some of these beautiful architectural structures.

Things to do in Aalsmeer in 12 hours!
Take a guided tour of the Historical Garden!
Future plans for the Zeilfort, Fort Kudelstaart
Experience flowery Aalsmeer with these 4 tips!